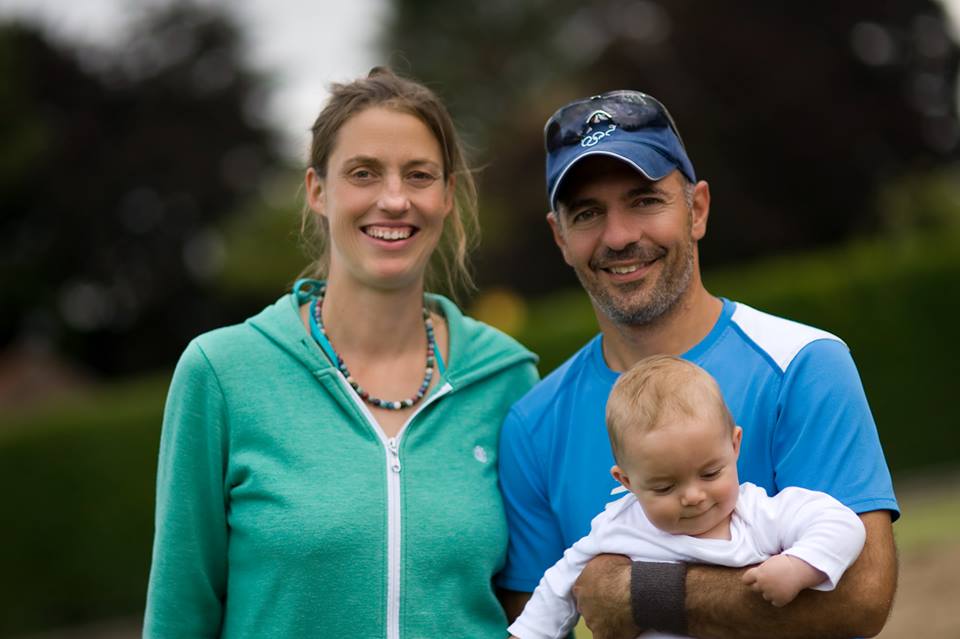 Mike is the founder of Cardiff Beach Volleyball. Julia and Mike would often visit Julia's family in Germany and see so many Beach Volleyball courts available to play in parks and around lakes. This inspired them to bring the beach into the city, creating the opportunity for others to participate in this great sport. Mike has been playing since 1997 and has achieved many top positions in Welsh and British tournaments.

Julia and Mike have 3 children, Liam, Tio and Eleni. Julia plays Indoor 6 a side Volleyball for Team South Wales who compete in the British National Super 8 division. Julia also has a wealth of knowledge and experience with Beach Volleyball having also achieved top finishing positions in Welsh and British tournaments. 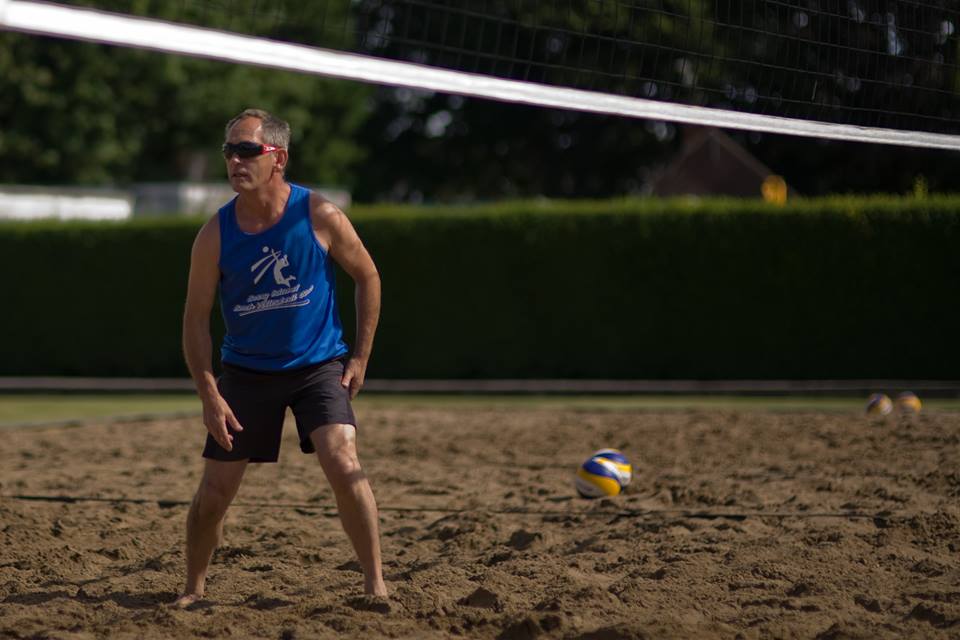 Carl Harwood, known as 'Coach Carlos' is also a co-founder of Cardiff Beach Volleyball. He has a passion for the sport dating back to 1997 when he and Mike started playing. Carl then set up the first Beach Volleyball Club at Barry Island in year 1999. Carlos is the organisation behind the Welsh and British National tournaments held at Barry Island and Cardiff Bay Urban Tour. His nickname was given by his Glamorgan University students from coaching the indoor teams. 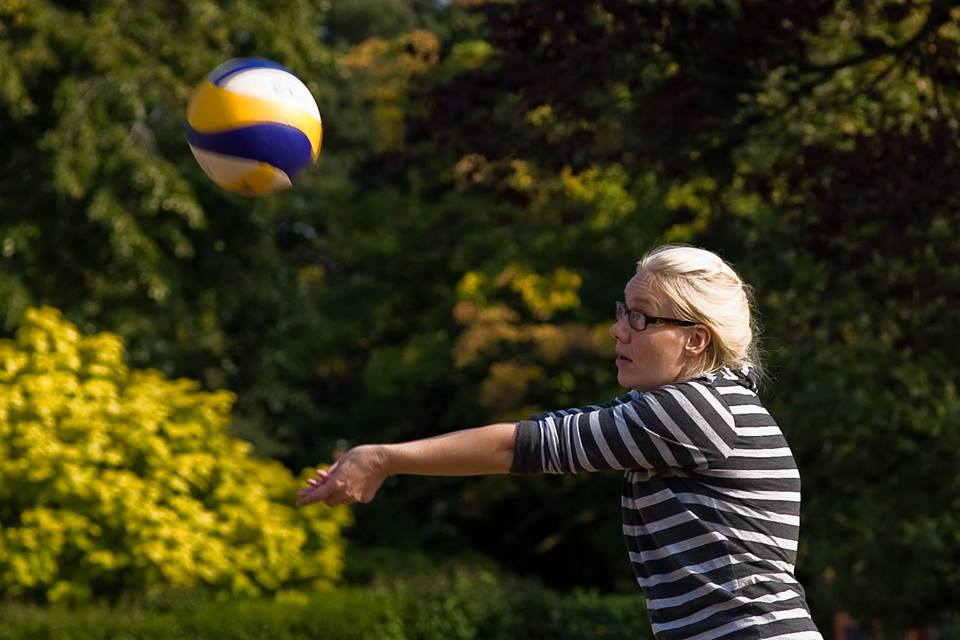 Riina and Carl got married... you guessed it! on the Beach at Barry Island over a weekend of playing Volleyball and celebrating. Carl arranged the wedding and a tournament together for all to enjoy. There was a wedding service on the Beach with a marquee set up for speeches and party. Riina has embraced the sport with her own passion so much the first dance as a couple instead was a game of Beach Volleyball against each other... which naturally, she won!!

Meet some of our Players 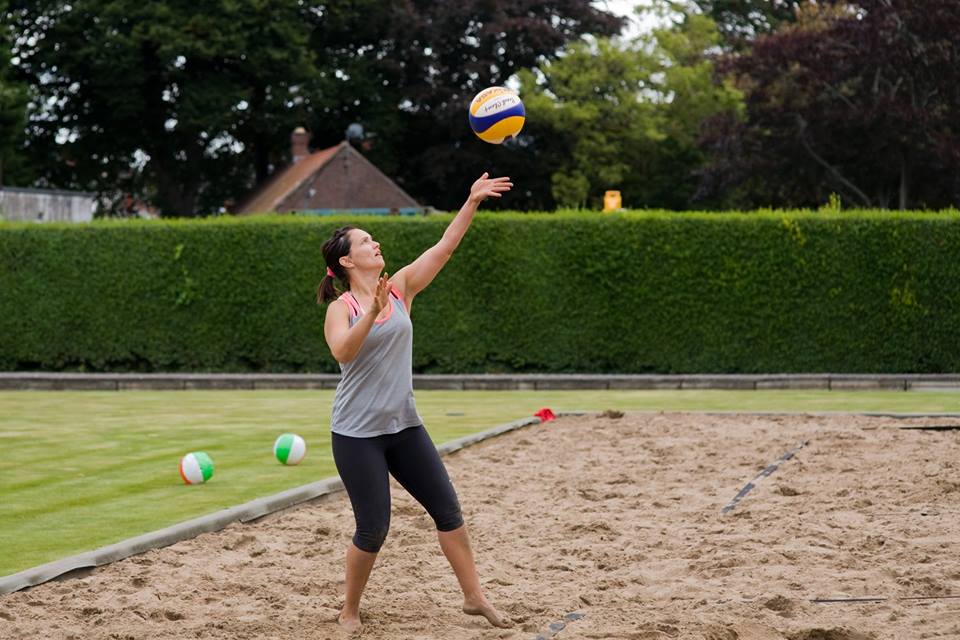 Jo Taylor has been playing Volleyball at National level for over 10 years. She has passion/ dedication and heaps of talent. Her inspiration came from a work trip to L.A. where she happened to stay on Hermosa Beach (home of the worlds greatest players). Jo is keen on fitness and nutrition is a mum of 2 girls and also plays hockey when she's not on sand. 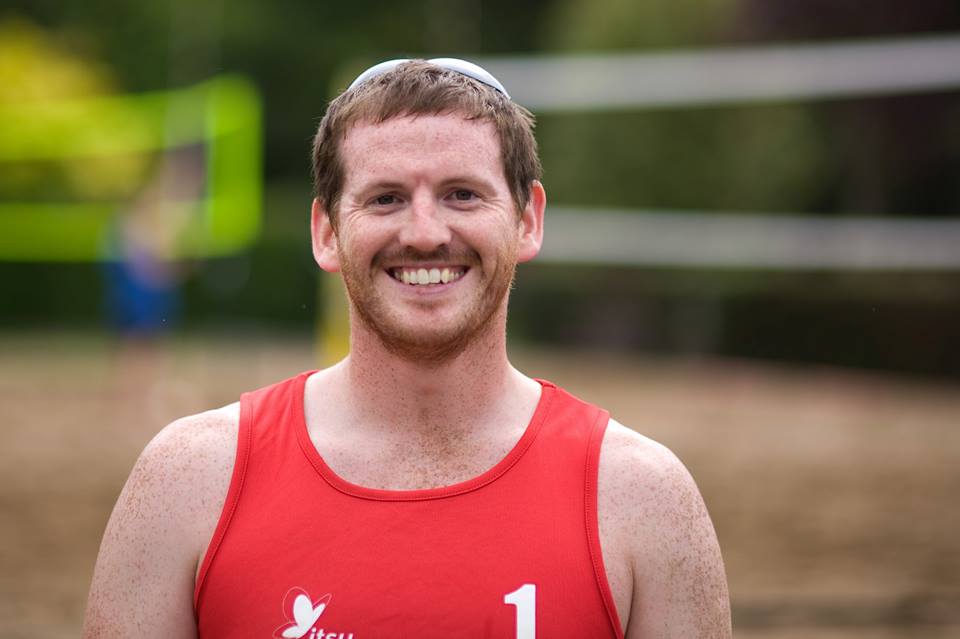 Andy was introduced to Volleyball by Mike after highly achieving in Badminton. Andy felt he could go no further after winning for many years consecutively Welsh National Titles. He soon turned his hand to Beach and there was no holding him back. Very quickly Andy became the most improved player on the Beach and was pushing the more experienced players with his quick defensive play, game strategy and awareness. 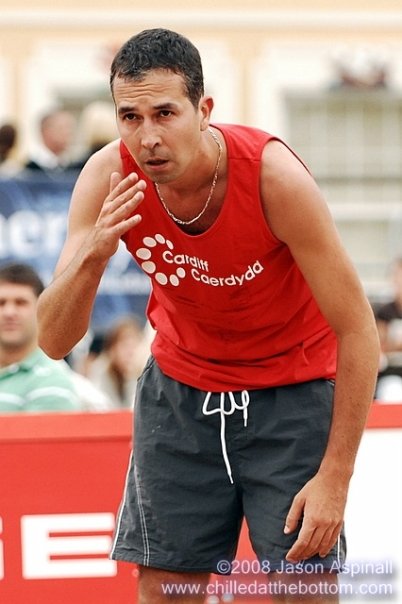 Ben (as most know him) has lived in the Uk since 2000 spending most of his time in Wales. His home town is Marseille, France. Ben has been a keen player and a good friend of Mike and Carl. He had his best Beach seasons partnering another French guy 'Ludo' on the British National Tour 2005-2008. Mike and Ben represented Wales in the Urban Tour at Cardiff Bay. 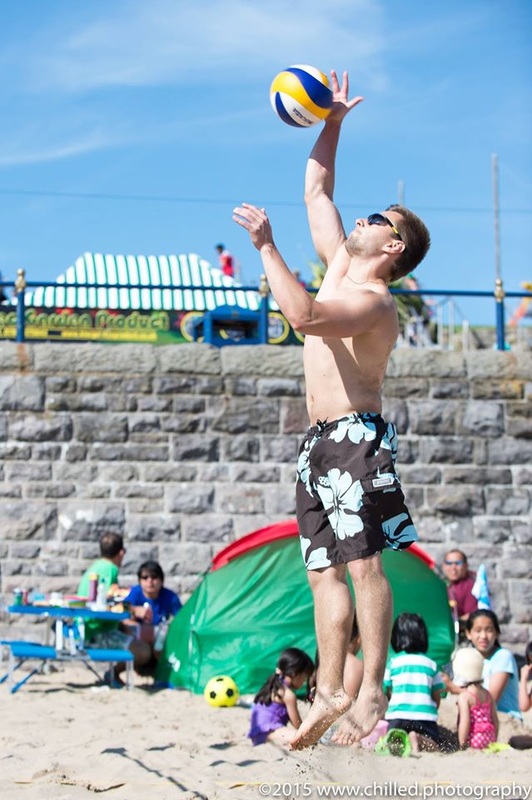 Psem, Shamak or you can call me Pete... Our Polish representative. Highly enthusiastic as he travels from Bristol most weekends to play. The new facility at Victoria Park has reduced his travel time in half. 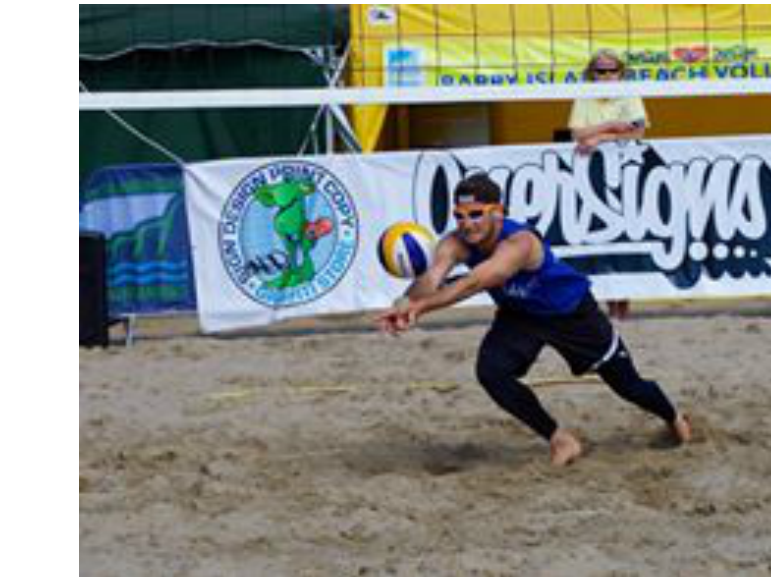 Aiden was lucky enough to live close to Barry Island. His parents would bring him to play from the age of 13. Carl encouraged and inspired him as he could see a great talent within. Aiden through his Beach Volleyball career has won every National Title for his age category. Under 16s, 18s, 21s and Senior National Events in Croyde 2 years consecutively. 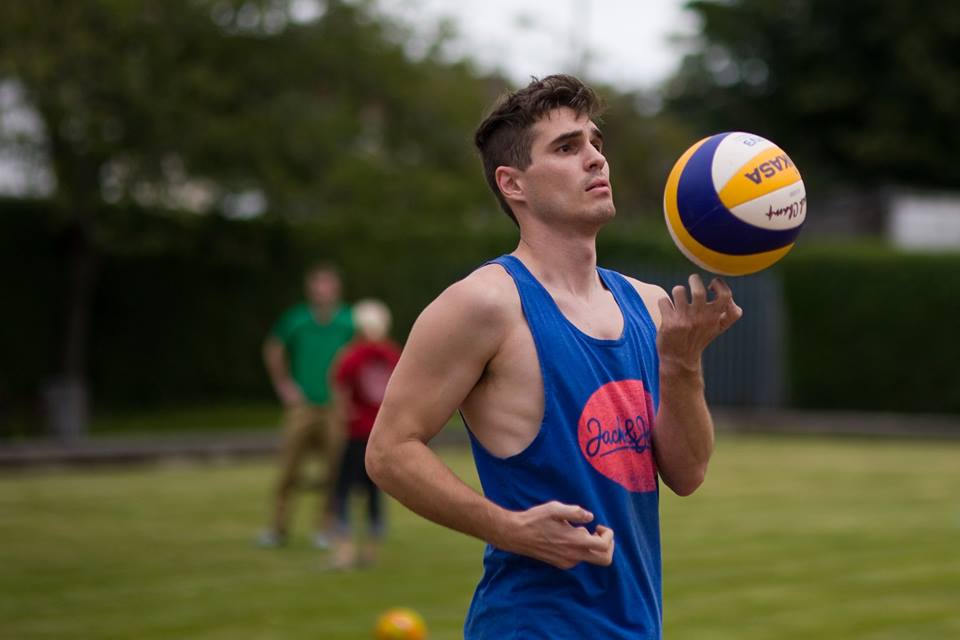 Ben is another keen player who travels from Bristol. Super talented and very committed to Beach Volleyball. Ben is also interested in coaching Beach Volleyball and spends his winter training with the World best players in Tenerife. 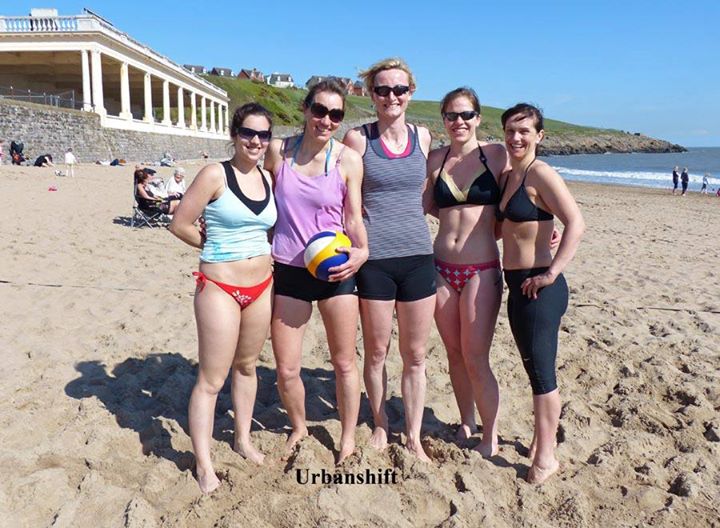 Some of the talented girls who play for Team South Wales in the winter. Beach Volleyball has allowed them to maintain and improve their skills and fitness through the summer season (while maintaining and improving a great tan too!). 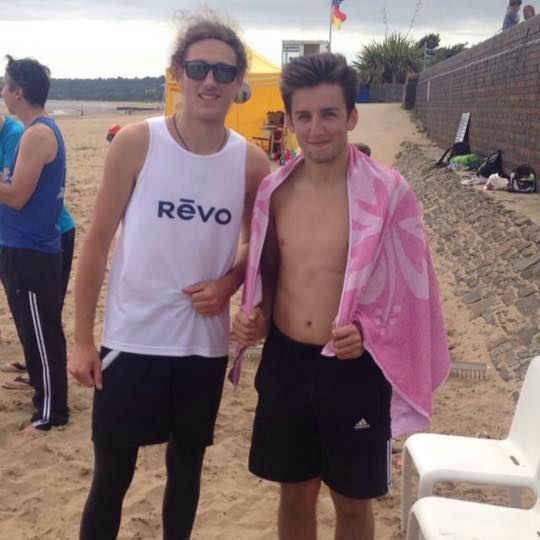 Billy and Nick developed their skills with the Welsh National Indoor Squad. Since coming onto the Beach they have quickly overtaken the experienced players in all aspects. They aim to compete in International Beach Tournament next year and will use the courts at Victoria Park for their preparations. 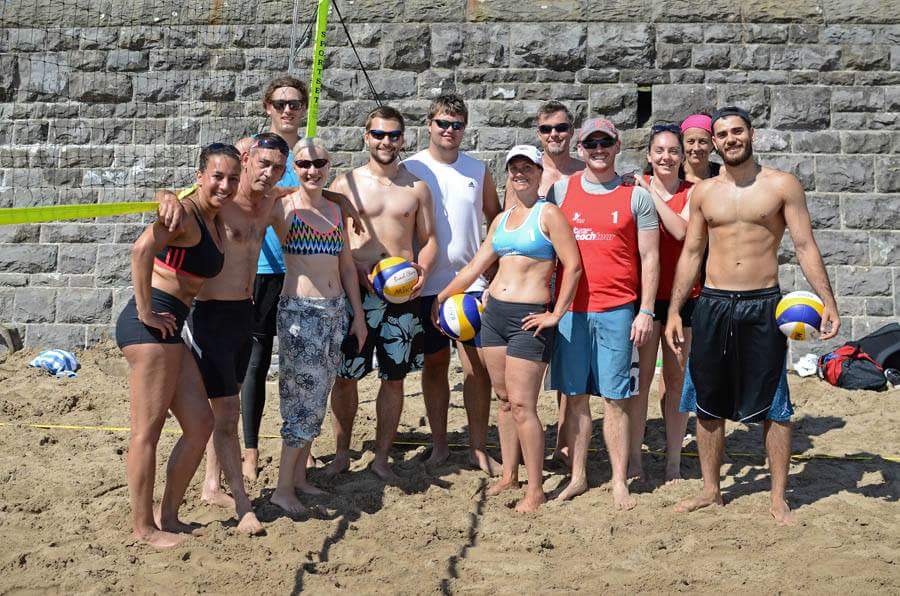 Some of our players at Barry Island 2015 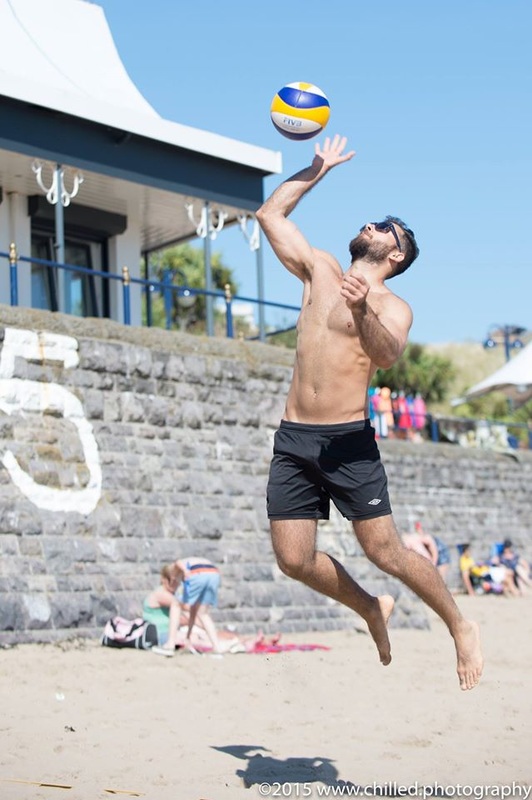 David played on the Iranian Junior Indoor Team as a youth. He had a 6 year break and had put on a lot of weight reaching 16 stone. After great determination he has achieved his ideal weight and size and has become a key player within our club. David will not allow a ball to touch the sand without a fight and is always willing to train and develop his skills. 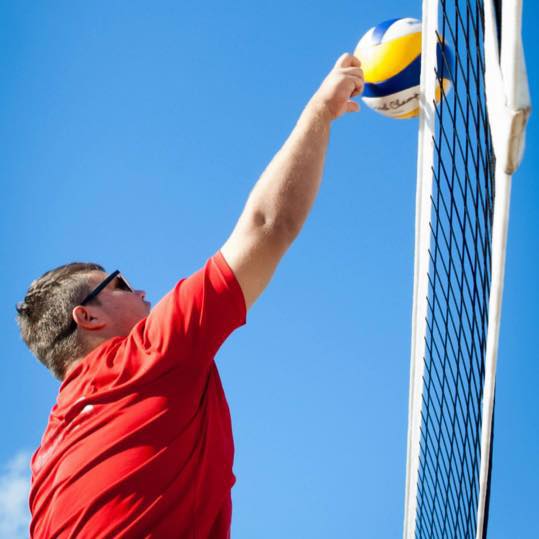 Conor has also come to the Beach from the Welsh National Indoor squad. His speciality is setting indoors and on the Beach there is no doubt the pokey shot.. Conor can use it for defence and setting too which is quite unique. He also plays Badminton which helps with court space awareness and strategy.